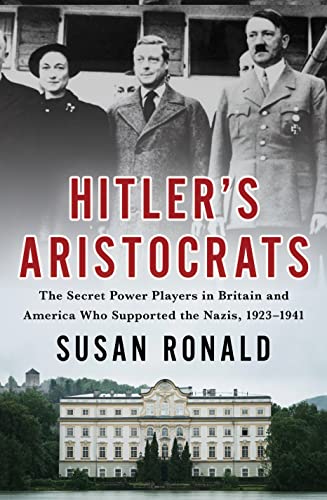 Hitler's Aristocrats: The Secret Power Players in Britain and America Who Supported the Nazis, 1923–1941

“I learned to admire the excellence of British propaganda,” Adolf Hitler said in 1934. “I am convinced that propaganda is an essential means to achieve one’s aims.” While this superficially explains Hitler’s misleading statements of “peace” in the years immediately preceding World War II as he rearmed, it ignores how he wielded the most powerful weapon he had at his disposal in fighting the propaganda war: the close interrelationship between Europe’s aristocracy, the political elite, and the beau monde.

The acclaimed author of Hitler’s Art Thief takes us into the shadowy world of the aristocrats and business leaders on both sides of the Atlantic who secretly aided Hitler and Nazi Germany, in Hitler’s Aristocrats…

 5/5
In this keen study, Ronald emphasizes the shocking extent to which American corporations like Du Pont and General Motors supported the pro-German fascist groups in the U.S., not to mention the behind-the-scenes support of Hitler’s own “alchemists” like I.G. Farben. The biggest-name sympathizers were, of course, the Duke and Duchess of Windsor, ultimately exiled by Churchill to govern the Bahamas to keep them out of mischief. Even Martha Dodd, the daughter of William Dodd, the fervently anti-Nazi American ambassador to Germany, was seduced by the Nazi machine, and she went on to become an unrepentant spy. Highly readable drama of highborn traitors who enthusiastically aided the Nazi ascent to power.
Read the full review on Kirkus

——– Kirkus Reviews
“Colorful… Ronald convincingly details a great deal of sympathy for Nazi Germany and fascism in general among English-speaking elites…her insights into how quickly anti-democratic views can take root in the popular attitudes of the wealthy are relevant today.”